We strive to be transparent by the public, regardless of their base knowledge of WiFi or networking, can understand our mission. That’s why we created this glossary of terms, FAQ section, and list of technical resources.

Please contact us if you have any questions or recommendations for improving the accessibility of our resources.

Given that our most recent report on the scope of the Digital Divide was conducted in 2018, we know that these metrics do NOT reflect the growing number of individuals who need Internet access because of hardships caused by COVID-19. Due to reduced hours, layoffs, and industry shutdowns, we must assume that there are more people who cannot afford residential Internet access in Pittsburgh. We must also consider those who do have Internet access, but the bandwidth of discount packages often does not support 2020’s new work and learn-from-home lifestyles.

While a more recent survey of residents without Internet access has yet to be done, we are currently working with an increasing number of community partners to serve remote workers, online students, and families in need.

In May of 2018, The Heinz Endowments awarded Meta Mesh a $15,000 grant in order to survey and analyze home Internet access and a sustainable approach to public WiFi in three under-served Pittsburgh communities. We chose to execute our project in Hazelwood, Homewood, and the Hill District because they demonstrated need, and they are areas where Heinz already focuses its efforts.

We completed more than 900 surveys and several in-depth interviews, all of which were conducted door-to-door by Meta Mesh employees over three months. We had two general objectives:

Our cursory conclusions include:

The full report titled Home Internet Access and A Sustainable Approach to Public WiFi in Three Underserved Pittsburgh Communities is available for your consideration.

We created this glossary to ensure that anyone, regardless of their previous knowledge, can understand our mission. Terms are defined and put into the context of Meta Mesh’s operations. This list is by no means exhaustive — we will continue to update this resource to make our “tech talk” more clear. If there is a term in our materials that you wish was defined more clearly, please contact us and let us know! 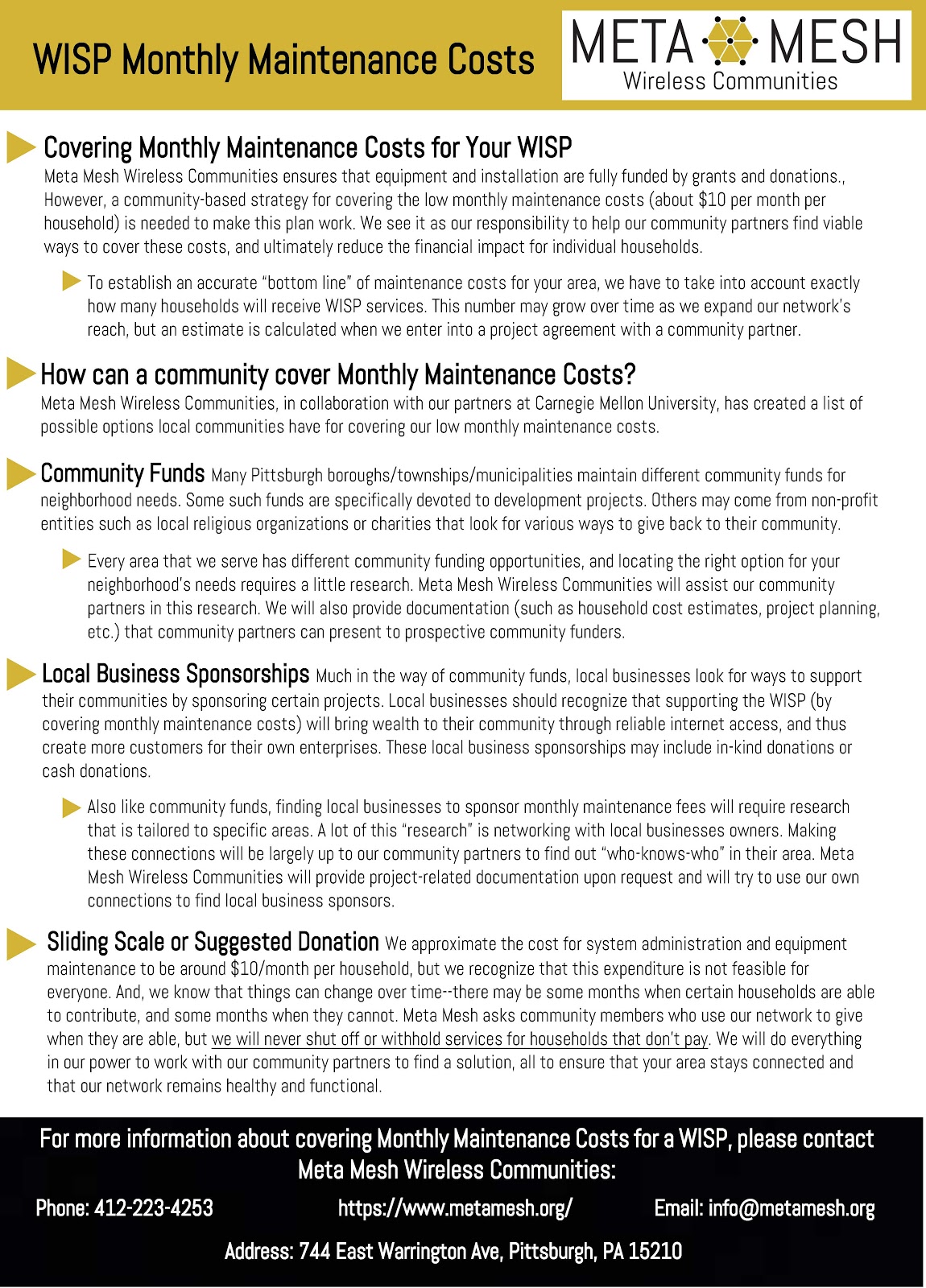 ​Is The Meta Mesh Network secure?
MMWC uses the same security measures other big name ISPs use. While no WiFi network security is without vulnerabilities, it is extremely unlikely for a breach to occur. For more on the technological capabilities/limitations, we recommend watching Jon Zeolla’s Talk on the subject. Jon works with Steel City Information Security and is very well-versed in how bad guys break WiFi security.

Can someone use Public-Space WiFi to access my In-Home WiFi?

Even if someone were to try to access your home network, they wouldn’t be able to. We have security measures in place that prevent anyone on our public WiFi networks from accessing other Meta Mesh networks.

Where is your open source software?

You can view our code on Github.

Is WiFi dangerous to my health?

No, not at the power levels specified by the 802.11 protocol. Read this for more information.